Design a site like this with WordPress.com
Get started
Skip to content
Stephanie Quick Uncategorized December 7, 2021 8 Minutes

We had a rollicking good time discussing the steamier side of Sasquatch encounters on Six Degrees of John Keel podcast! In fact, host Barbara A. Fisher has invited me back for another session, focusing on the gender dynamic of Bigfoot and how this interacts with/reflects larger societal concerns – watch this space!

What follows is the ‘white paper’ referenced in the podcast. Enjoy!

“Bigfoots coming at me from every angle!!!”

A Not Safe For Work post documenting an ongoing synchronicity storm on a goofy theme – spooky, sexy bigfoot!

This would all be fun and games except that i’m headed out to a remote cabin in the heart of Bigfoot country in a couple of weeks. I’ve long been aware of Bigfoot’s paranormal aspects and non/demi-physical nature. A completely spectral entity does not alarm me, however those pesky footprints testify to a certain period of frank physicality – and even a minute or so of manifestation would be more than this little old lady could handle!

What’s worse is my psychic powers have taken a hit with the first professional haircut I’ve had in two years. The stylist took off a LOT of hair and it looks like Oliver (my chihuahua) has been chewing on the ends while I’m sleeping.

Will I find myself in a Samson and Delilah type confrontation with a big hairy monster, in the shadow of a volcano? Or will the gentle beast of the forest bless me with preternaturally speedy hair growth? 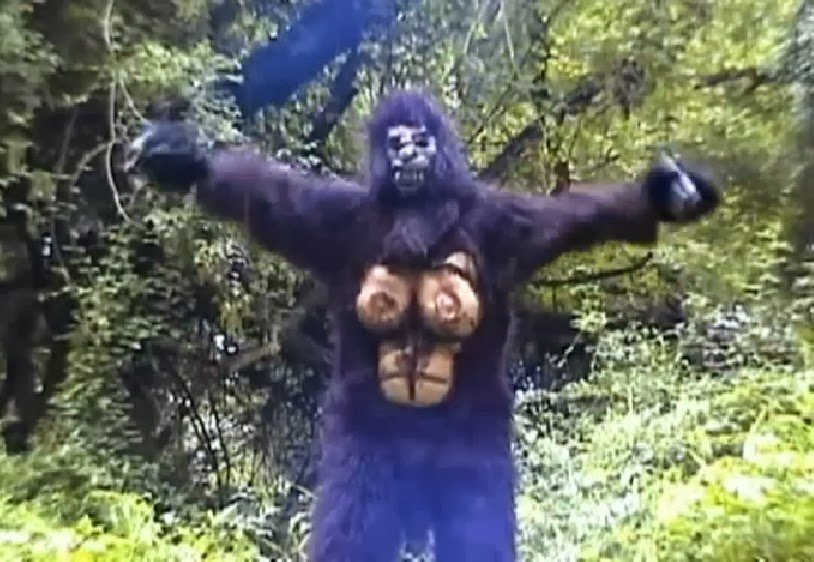 Ben Joffe replies with the small ‘guru yeti’ type figure pictured in David Huggin’s painting of his encounter with an alien woman with whom he later becomes sexually involved, drawing the connection between ufo/alien encounters and the hairy forest spirits as well as Tibetan tantric initiation practices – citing this paper by Larry G. Peters.

7/3 blog post on Atomic Cold War Sasquatch research published – this started to make me feel a bit beleaguered, as i’m headed up to that cabin w my brother – retired AF, spent his career spying on Russia, and lived for years in Alamogordo, NM (click thru and you can buy a tee shirt)
Cold War Secrets of the Atomic Sasquatch | EXPLORING THE OUTER EDGES OF SOCIETY AND MIND (wordpress.com)

7/7 Jeffrey Prichett shares a memory post on Facebook from 2014 – a picture of bigfoot captioned: “I paranormal you can’t catch me Billy Bobs xoxo”

7/8  “Bigfoot Is Real and He Tried to Eat My Ass” Trucker hat sniickersnee shares with me on twitter.
I respond: “a tale as old as time! My fave BF story i heard maybe 17 years ago? so a small indie film crew is up in the wilds of BF country in RV’s & trailers. One nite they hear a commotion and a huge BF runs thru their camp, right by their vehicles! They can tell it’s a male because it had a raging hard on. Well, as it turns out, the star of the movie was a certified Playboy Bunny and the suspicion was that BF had somehow become enamored of her…”
https://twitter.com/Sniickersnee/status/1413186021701865476?s=20

(truly I should have kept that story to myself if I wanted to slow down this slew of NSFW Bigfoot synchs! Live and learn.) 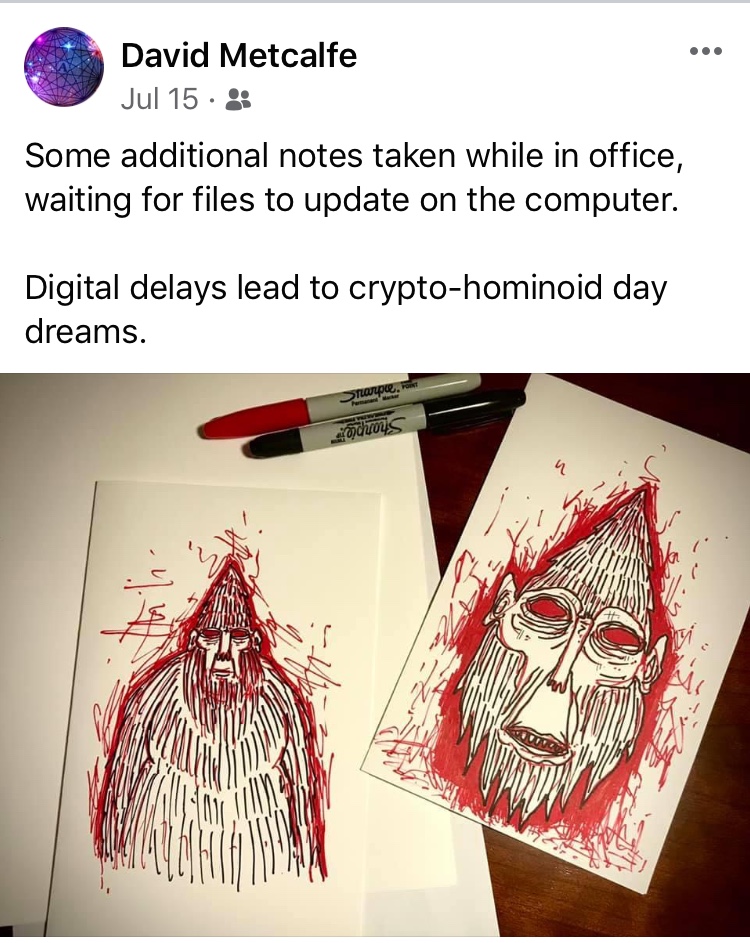 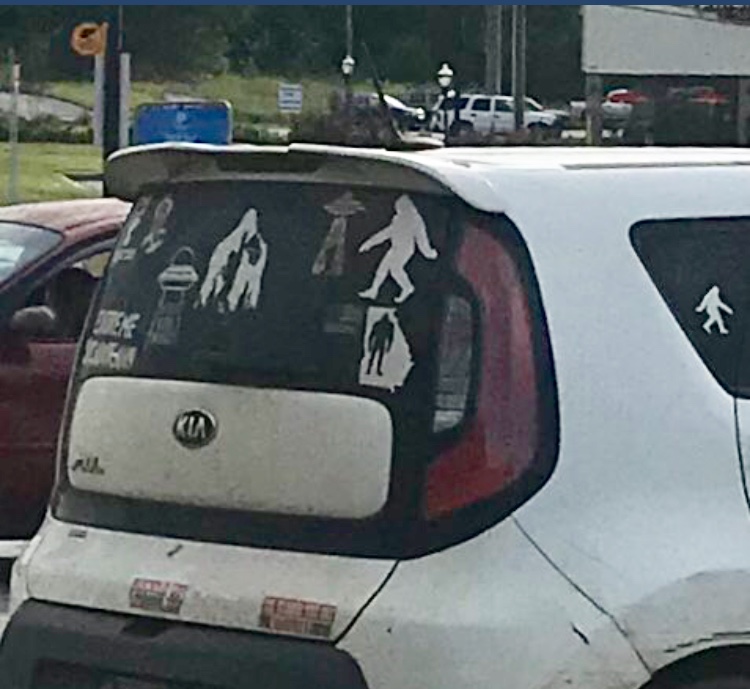 7/16 An anonymous correspondent sends me his scan of the R. Crumb “Whiteman” comic – Whiteman is abducted by a family of Bigfoot as a mate for the young female, in the end he goes native (it is a typical R. Crumb fantasy)
Crumb Newsletter: Whiteman Meets Bigfoot (rcrumb.blogspot.com) 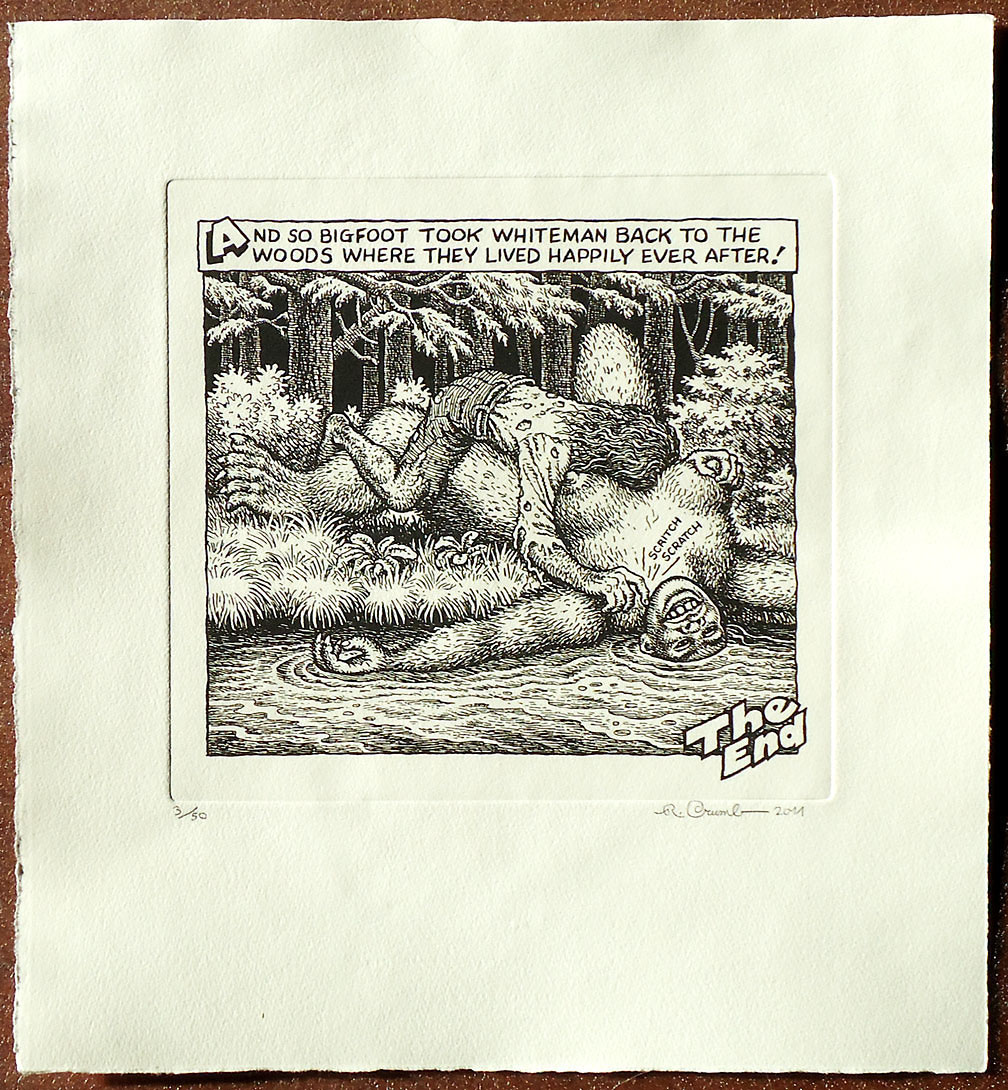 7/18 Bigfoot Titty Slide – shared to me by Alexx Bollen

7/20 “Continuing plagued by squatches-this time in the Unresolved Mysteries subreddit. An Alaskan ghost town haunted for decades by a murderous cryptid … Alarming; but makes a change from Bigfoot Eggplant pics in the DMs”

7/22 @Galaxopithecus on twitter: “Hey everyone who wants to sex up bigfoot. It’s still bestiality even though it walks on two legs. So do kangaroos but nobody is out there espousing the romantic aspects of sexing them up. Or that’s a different twitter community anyway!!”
https://twitter.com/galaxopithecus/status/1418251323636596736?s=20

“This might not be all that “mysterious,” but it is certainly intriguing. A paleo-anthropologist friend turned me onto Zana’s story. It’s exciting to think that there could still be undiscovered kinds of people roaming around somewhere in the vast wilderness.”

“In the mid-eighteenth century, hunters in the Ochamchir region of Georgia (a Province of Russia on the edge of the Black sea) captured a ‘wild woman’ who had ape-like features, a massive bosom, thick arms, legs, and fingers, and was covered with hair….Zana enjoyed gorging herself on grapes from the vine, and also had a weakness for wines, often drinking so heavily she would sleep for hours. As Colin Wilson points out in The Encyclopedia of Unsolved Mysteries, this is likely how she became the mother of many children to different fathers.

These children usually died when she tried to wash them in the freezing river. The villagers started to take her children away from her and raise them as their own; unlike their mother, the children developed the ability to communicate as well as any other villager.”

Her story echoes that of “Whiteman” by R. Crumb.

Asherah VII on the relationship between cryptid, UFO, and ghost research
https://www.churchofmabusradio.com/2021/06/07/asherah-vii-ghost-cryptid-ufo-and-alien-research/

A Rock Hound Talks about Rocks and Bigfoot in the Pacific Northwest
https://www.alexxcast.com/episode-300n/

Suzy has friendship w Yeti family from Childhood via Linda Godfrey
A woman in childhood was friends with the whole bigfoot family (anomalien.com)

Paranormalizing the Popular through the Tibetan Tulpa: Or what the next Dalai Lama, the X Files and Affect Theory (might) have in common | Savage Minds

Bigfoot Riding a Unicorn at Ace Hardware via titty tornado on twitter (tagged by my brother)
https://twitter.com/AcmeHuntingGear/status/1424475445530038274?s=20
Earliest Sasquatch Erotica from Alexx Bollen
Truly the most NSFW/NSFL found in this whole, sordid document!
Alexx on Instagram: “Facebook reminded me that I drew this madness 4 years ago. “Unfortunately finding a datable girl in my age group is rarer than a sasquatch…”