Mike Clelland kindly published my account of a hummingbird synchronicity on his hidden experience blog in July of 2012. This is the first synchronicity which I wrote up and released on the internet.  I was inspired to send him an email about this experience after reading about a dream he had which he described and illustrated marvelously on his blog. I encourage you to read Mike’s account of his dream. The comment section is interesting as well, I was far from alone in being inspired by his dream and Red Pill Junkie in particular has some great information on the esoteric life of hummingbirds.

Next follows my account of a waking experience I had maybe a decade prior to Mike’s dream, I reproduce it here as it appeared on his blog.

“Years ago I was living in a mother in law ‘type’ apartment (built with a connecting wall to a larger bungalow style house). The place has a lot of windows that look out onto a grove of lovely oak trees.

One sunny afternoon, I was laying on our couch downstairs in a room with big windows, I was near the door that leads out to the patio. It was gorgeous out and the door was open. I was reading one of Paul Devereux’s works, most likely “Shamanism and The Mystery Lines” in which he discusses the Nazca lines in Peru.

I wondered to myself about the hummingbird figure which someone made on the Nazca plane. It’s quite strikingly graphic, but I’ve never seen a hummingbird in anything like that particular position. It’s a beautiful work, but it struck me that the position of the bird is so unnatural and I remember feeling stumped at how the artist came up with that curious interpretation. (I’ve taken a number of college level art classes, including life drawing and art history, so I’m familiar with the process.)

Wondering got me nowhere fast, and I realized I was a little peckish. I stood up to go to the fridge and get some cheese when I heard a buzzing sound. Looking towards the sound, I saw that a little male Anna’s Hummer had got into the house and was trying to leave by flying through the window. 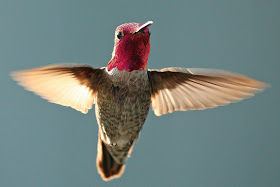 If you’ve ever seen a bug trying to get out a window, this little man was engaged in the same pursuit, staying against the glass at the edge of the window and slowly moving up and down, wings a blur. The angle formed by the edge of the window made it easy for me to slowly approach the little hummingbird and close my hands around his body, all the while saying: “Let me love you, let me love you.” I wanted to convey my intent, though I’m sure my heart was beating as fast as his!

I walked outside a few steps and opened my hands to let the hummingbird fly off. I looked down as I lifted my right hand, to see the hummingbird lying prone in the palm of my left hand. It was positioned with beak stretched out to the front and wings extended to each side. Exactly like this: 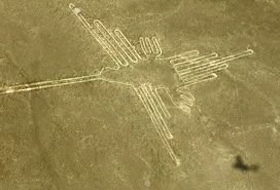 Within a second or two he realized he could fly away, and he did. Now I wonder under what circumstance the ancient artist held a live hummingbird in his or her hands.”

Even today it’s uncanny to me the way his illustration echoes my hummingbird encounter – I was laying on a couch at right angles to the window which caught the hummingbird in the same way as the owl in Mike’s dream.  In fact the entire interior of the vehicle with bench seat, windows and doors is very reminiscent of the layout involved in this incident.  I’ve worn glasses since I was a young girl, my sister and I have both been accused of being brainiacs our whole lives (she graduated from UC Berkeley and Boalt Law School), and of course I ended up holding a live hummingbird in my hands after it got inside my house.

Both of our experiences, in dream and waking life, echo the structure and symbolism of Jung’s original synchronicity – an overly brainy, reclining woman whose question is answered by an iridescent flying creature crossing the barrier from exterior to interior space. The reclining owl of Mike’s dream is associated with the Greek goddess Athena, a notoriously smart cookie.

In Jung and Mike Clelland’s instances a man assists the woman/sisters in wrangling the winged creature; in my case though there was no human male involved the hummingbird himself was obviously male with a bright fuschia head.

Lastly, in the comment section on Mike’s original dream post doug says: “I had to comment on this one because the illustration is so striking to me personally. The girl(s) in the back, especially, look(s) almost exactly like my girlfriend, Cassandra…”

My husband had lived in this apartment for many years before we married and I came to live with him. Before we met,  he lived for years in this same space with his girlfriend.

Who was named Cassandra.