Drew Beck wrote up an experience he had as a child in response to my request. He was reminded of this experience when i posted the above picture of an owl mural in a facebook group to which we both belong. His narrative follows:

“I used to stay in town (population 500) with my great grandmother some nights. She had moved into town from the farm after my great grandfather died. I could walk to school from her house in a few minutes–a definite plus given the hour long bus ride from our farm to school. The event I vividly remember was from when I was 10 years old. It was a nice, warm night and I was in an upstairs bedroom of her old house. Her house was on the edge of town, about 1000 feet from a river and large forested area (a preserve of some sort). The window was open and I was listening to the old tube radio from the 1930s (it had a beautiful rich sound). It was probably 2 a.m. and I was dozing on the bed. I suddenly came wide awake because I heard this loud howl from down by the river. It was a short howl that would repeat every 10 seconds or so. And damn, it was loud! I heard it a few times and decided to go investigate. I grabbed my flashlight and took the screen off the window of the 2nd floor bedroom, crawled out onto the roof of the garage, and got myself down to the ground by shimmying down a drain pipe. I began walking towards the river, which was surrounded by a thick forest, IN THE DARK OF NIGHT…I remember walking towards the river along the one street in town with a bridge, and then…I’m suddenly back in the bedroom and it’s 5 a.m. The only damn thing I remembered about my little adventure was looking up into a tree and shining the flashlight on a huge-assed owl that was looking back at me. Nothing else…not getting to the river, nor coming back. Just that damned owl. For years afterwards, I was scared of owls. I’d hear one hoot out in the grove surrounding our farm and I’d almost crap my pants with fear. I’m still a little nervous of them, but I’ve come to love them over the decades.

Here’s a weird detail…I remembered the gist of a song that was playing on the radio when I was jolted awake. But I couldn’t remember what it was called and didn’t find it again until just last year… https://youtu.be/IH3X4Tbb06Y 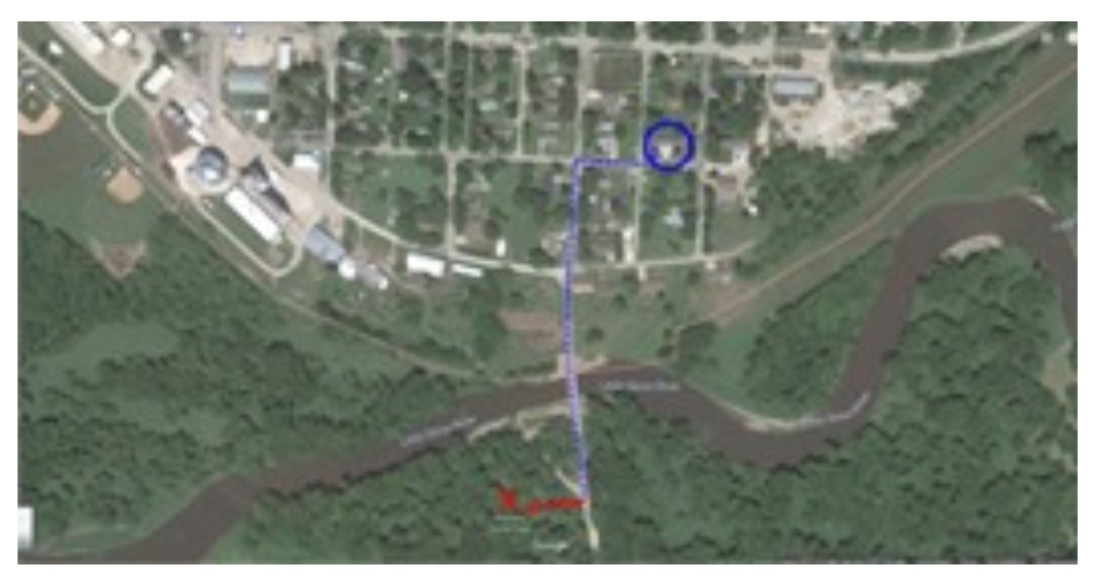 ..granny’s house is circled in blue, and X marks the spot of the general area where I wound up.”

My response and questions – Drew Beck’s answers are in bold:

Drew thank you for writing this up! I think that narratives of strange experiences written up by the people who had them are incredibly useful in learning about the phenomenon.

Before I list a bunch of questions I want to say that some of them will be seeming to lean towards a ‘natural explanation’ of your experience. My intent is not to tell you what happened to you but to hopefully get towards a fuller documentation of    what you felt, saw, thought, heard, etc. that night.

In my experience the vast bulk of mystical/paranormal/high strange experiences come *through* the natural world. For example, in my hummingbird/nazca lines synchronicity my thought question was answered through the very physical event of a hummingbird flying into my house. That’s not defying any laws of the natural world, especially as I fed hummingbirds on the patio outside that door.

The unusual part, the part that gives the event meaning, is that although I fed hummingbirds there for 17 years that’s the only time one got into the house.  I hope this helps you understand that the thrust of my questions is not hostile.

I have had a missing time experience myself years ago, I was walking down the street and saw a couple of strange entities and lost about 45 minutes mid stride. I can’t really say much about why or how these events occur.

Regarding your fear of owls after this experience. To my mind, these emotionally charged changes after events speak to the reality of these encounters – regardless of what someone following you in a drone would have ‘seen’ happen, there was an effective informational/emotional exchange.

Back in the last century, I was meditating and tapped into the psyche of a person who was missing. Later it came to light that they had been murdered. I had a very vivid impression of their bodily position and surroundings (they were lying face up in a small space with a “ceiling” mere inches above their face) along with their emotional state. When their body was found and their murderer caught it was revealed that this person had been confined in a small space prior to being murdered.

I caught a case of claustrophobia from that meditation experience which I have yet to shake. As a kid I loved hanging out in small spaces but since then I flat out panic. It’s been an issue when i’ve had to have MRI; once when I was in my thirties they had to have a guy stay in the room with me holding onto my leg before i could get into the machine for the test.

Drew, I am happy that you have been able to come to a friendship with owls!

Have you identified the species of owl you saw and heard? Almost certainly a barn owl. It had that typical white face. But it seemed larger to me, probably because I had it in the flashlight beam and it was on a low branch.

Are they found in the area year round or only occasionally? They are regular residents.

Does the sound you heard calling you into the night match up with the species of bird you saw (provided you’ve been able to ID both). Well…not really. The sound I heard was much louder than one would expect. However, it was a very still night so there weren’t any competing noises, except probably crickets and katydids. I had never heard a barn owl make that loud of a sound before. There may have been more than one owl too because I’d hear some of the “calls’ in rapid succession.

Were you prone to waking up at night? I’ve always had a degree of insomnia…and I remember kind of dozing when the sound of the owl suddenly brought me wide awake.

Were you prone to sleepwalking? Nope.

Did you sneak out a lot or spend time outdoors at night? Yeah, I spent a LOT of time outside as a kid. My buddy and I made regular forays into that forested area (Wanata State Park, which has unfortunately lost a lot of trees over the decades).

(I did as a kid, our church had potlucks and we’d all run back and forth between the food and the creek out back of the church until way part dark, it was perfection.) –Love it!

Did you notice a change in your nocturnal habits after this experience (afraid of sleeping at your great grandmother’s house, insomnia, never sneaking out again, etc.)? Not really. I enjoyed the heck out of my great granny’s house, especially that bedroom. She stashed her old journals up there and I would spend hours reading about things that happened back in the 1940s through the 1960s. And then there was that wonderful old tube radio that had such a rich sound. I was lucky as a kid because I could easily sneak out of the farm house, which I did fairly frequently.

How long before this occurred did your great grandfather die? 3 years (1967)

How long after this did your great grandmother live? She lived 16 more years; died at the age of 97!

Was there any type of disruption in your or your family’s life taking place around the time of this incident (before or after)? Indeed. My parents divorced in 1969, not too long after we moved back to the family farm from northern Colorado. I was 10 at the time so it was quite traumatic for me. My mom began dating the man who would become my stepdad around this time as well. They got married in December of 1970. My stepdad was a great guy, though I was a little afraid of him at first because he was immensely strong.

Did you develop any new interests or obsessions or aversions (aside from the owls) around this time? I was already a gearhead. 🙂 I also became very interested in short wave radio broadcasts around this time.

Any of the place names associated with the area, or the ecosystem/general lie of the landscape reflect places/people/interests which since have been present in your life? The house…my parents lost the farm in 1984 and moved around some. They eventually wound up in this very same house, where they lived until 2010 (my mom) and 2012 (my stepdad).

My thoughts after reading Drew Beck’s answers in bold above:

What first strikes me about this is that Drew was in a classically liminal situation when he had this experience. His parents were divorcing and his mother beginning a relationship with the man who would in future become his stepfather. George P. Hansen’s work on the trickster and the paranormal points out that liminal situations are conducive to paranormal occurrences. The trickster of the title is also associated with travel, and Drew was sleeping at his great-grandmother’s house.

The role of the house is curious as well. I joked to Drew that this house was a time machine, but i’m not sure that it’s a joke. It’s typical that a great grandmother’s house contains so many archaic aspects, especially regarding communications/media – the old radio, the old magazines and books. But in this instance this is also the same house that Drew’s future family would live in in the future.  The boundaries between past and future were blurry at the moment of this experience, and thin boundaries tend to be associated with paranormal experiences.

Regarding the radio and Drew’s subsequent obsession with short wave, it’s common that people have new obsessions and interests after these experiences, often involving technology. I’ll only add that radio waves are a form of invisible communication.

This last point is a bit out of left field but it really struck me. In Isak Dinesen’s short story “Supper At Elsinore” two elderly, spinster sisters live lives spent in remembering their glory days as desirable young women long ago. One winter is especially cold and the river running through town freezes over for the first time in almost a century. It turns out that this phenomenon allows the dead to visit the living, at least until the ice breaks, and the two sisters receive a visit from their dead brother. Old, single women living in a house filled with ideas of times past, a frozen river, paranormal communication – these themes echo throughout both Dinesen’s story and Drew Beck’s. The icing on top is that Drew is well known for his love of cold weather, having expressed a desire to move to colder climes many times.